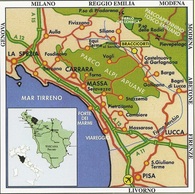 The Garfagnana is North of Lucca and Pisa, very much the finger tip of Tuscany. We are 50km from Lucca and about 50km from the sea at Massa. Surrounded by a natural barrier of two mountain ranges, on one side the Apennines and the other the Marble Mountains of the Apuan Alps.

The Garfagnana  is very much a traditional area, the name coming from Longobard and Roman Origins of the area. The area is  Rich  in forests , such as Sweet Chesnuts being one of the main, along with vast Beech forests. it is an area that has been sheltered and protected from the changes and the effects of mass tourism and general development that has been seen all over Tuscany and therefore maintains a way of life and atmosphere that has virtually been lost in other areas of Tuscany.

Why choose the Garfagnana - what is there to see and do ?

It is an area renownded very much for the outdoor way of life, walking, riding and biking through the amazing and lush tranquil setting of the valley, medieval villages and rich forests, to the High Mountains peaks and lush pastures. The area is great for walking & Trekking with a great network of waymarked walking trails & Via ferrata plus we even have the highest peak in Tuscany with Monte Prado at 2054m. There are excellent mountain bike trails ( and I mean excellent ), along with roads that are just calling out to be cycled on "Italiano style" on a road bike, Lakes for kayaking in the shadow of great mountain peaks. Exploring the medieval villages along with old fortresses and castles of the area..... and the list goes on.....The 2 mountain ranges here give us endless choices for walks and exploration, from marble quarries in the Alpi Apuane to the high rolling Apennines. If you are looking for a destination without  a mass of people and tourists everywhere, hardly anyone of the trails but with all the Tuscan feel you could want.... then look no further.....

The Garfagnana - A Jewel in Tuscany waiting to be discovered

The Garfagnana, the “Hidden Corner of Tuscany”, off the beaten track of tourism and full of natural treasures and traditions. Surrounded by Natural barriers of 2 mountain ranges, on the one, the chain of the Alpi Apuane on one, and the other the Appennino Tosco-Emiliano. These two ranges have an amazing contrast, hugely varying in a small distance, giving two separate environments, different morphologically, socially and also traditionally. From them an unusual range of images and colours are born to the naked eye and ones imaginaion. The sharp peaks of the Apuane or the Marble Mountains of Carrara, with its white marble glistening in the main quarries with mediteranean vegetation . To then cross the River Serchio to the 2nd range, completely contrasted by the profile and high undulating ridge of the imposing Apennines. With  green pastures and that of the colour of the immense woods of beech trees and an open ridge line that tops 2000m and flora and fauna that gives of feel of being in Scotland, with waves of bilberries, juniper and heather on the mountains.. In the fondovalle (lower valley), the crystalline waters of the Serchio, serve as a dividing line among these two landscapes, different, but equally fascinating.

The Garfagnana and the Valley of the Serchio River, serve as an ideal environment for one who wants to live in direct contact with nature, whilst being able to rediscover the history of a valley and the traditional culture and past of its inhabitants. The Garfagnana, is an area set apart from the province of Lucca, that has succeeded in the passage of time an almost unchanged native landscape and environmental characteristics. The climate, with middle of the range temperatures distant from the high values of the lower plains of Pisa, due to the freshness of altitude and a real alpine weather system. The valley has the abundance of water due to good rainfall from what one could call a real micro-climate due to the 2 ranges of mountains that close the valley. The weather patterns have given a luxuriant aspect to the natural vegetation. Throughout the year the hillsides are an oasi of green, especially the slopes of the Apennines and the Park of the Orecchiella full, to the Alpe Apuane and its bare peaks, both areas of mountains are today National and Regional Parks. These parks are of course home to a great deal of wildlife, giving shelter to lots of species of animal common and rare, plus species indigenous to the area. The area contains rare kinds residual of the ancient glaciations as well as many types of flora, some indigenous to the area, examples such as the Rhododendron ferrugineun and many other flowers which in spring time gives colour in ever aspect of the valley, from varieties of Orchid and fields of Narcisi, to great numbers of common flowers such as gentian and santalina.

There is something for all in the Garfagnana, a natural valley that time has not spoilt, and a region that one can call the Real Hidden Secret of Tuscany – a Gem in Tuscany.